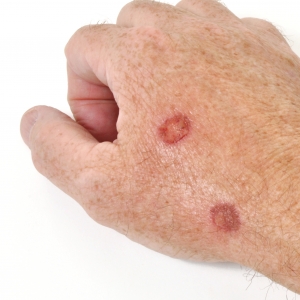 When a basal cell carcinoma is treated for the first time, it is the best opportunity to completely remove it as subsequent treatments have a lower chance of success. The aim is to remove the tumour from the patient and if this goal is not achieved initially, the other criteria will not be met. The cosmetic outcome should not be the top consideration for risk of failure to cure the patient.

With the increased incidence of basal cell carcinoma, there is certainly a need for a variety of treatment options. Counselling patients about these multiple modalities and providing them with the expected cure rates certainly benefits patients for the management of these skin cancers.

Nodular Basal Cell Carcinoma: The most common variety of basal cell carcinoma comprises around 80% of all basal cell carcinomas. They begin as flat lesions that are best seen when you stretch the skin, as the stretching helps you delineate the edges of the lesion. A common description of such lesions is pearly papules, with a raised edge. There is a tendency for them to ulcerate in the middle – hence the terminology “rodent ulcers”. Most are on the face and, if left untreated, they can be particularly destructive, especially around the nose and the eyes.

Superficial Basal Cell Carcinoma: Represent about 15% of basal cell carcinomas, presenting as red patches within plaques. It may be difficult to differentiate them clinically from actinic keratoses, squamous cell carcinoma in-situ or a benign, inflammatory lesion (psoriasis/eczema). They are most commonly found on the trunk and limbs, and not usually on the face.

Micro-Nodular Basal Cell Carcinoma: Such lesions look innocuous and often appear as a whiteish or pearly area. They are most common on the head and neck and are often large before diagnosed, hence they have a high rate of recurrence and, unfortunately, a high rate of perineural invasion.

Morpheaform Basal Cell Carcinoma: Sclerosing or infiltrative basal cell carcinoma. They are usually found on the face and present as what looks like a scar, but without any history of trauma. They are usually flat or slightly depressed and can be yellowish in colour. The surface tends to be smoothe and shiny. As well, the borders are usually ill-defined, hence their actual size is often much greater than the clinical extent of the tumour.

Pigmented Basal Cell Carcinoma: This is a variant of nodular basal cell carcinoma, usually with a few flecks of brown pigment. Occasionally such lesions can be completely black or blue/black and may be difficult to differentiate from nodular melanoma.

How does Basal Cell Carcinoma present?

How is Basal Cell Carcinoma treated?

Cryosurgery: We limit this procedure in our practice to treating superficial basal cell carcinomas only. Complications include delayed healing time, hypertrophic scarring, post-inflammatory hypopigmentation and, more particularly skin cancer recurrence due to this modality, that can become misleading in tumour extent due to the concealment by scar tissue arising from the healing phase of liquid nitrogen therapy.

Electro-dessication & Curettage: This procedure may be considered as an alternative firstline of treatment to surgery for non-aggressive basal cell carcinomas, especially in poor surgical candidates and non-cosmetically relevant locations. It may provide a good cosmetic result if the lesion is in concave areas and for patients with numerous superficial lesions that would require multiple excisions and repairs if treated surgically. Cosmetic outcomes following this procedure are generally considered to be inferior, however, to those after surgical removal. Major risks of this procedure include hypertrophic scars, loss of pigment, depressed or atrophic scars and tissue contraction.

Mohs Micrographic Surgery: This is commonly used in cases of recurrent lesions (areas that are at high risk of recurrence include the eyelids, nose, ears, forehead and scalp), lesions greater than 2cm, lesions with poorly defined borders, or invasive lesions that have spread to underlying cartilage or bone. It’s also the preferred method for tumours that have been left untreated for a long time or for atients presenting with Nevoid Basal Cell Carcinoma Syndrome.

Radiotherapy: This is an option if surgery is contraindicated. It has the advantage in that there is the avoidance of an invasive procedure in those who might not be able to tolerate surgery, or are unlikely to undergo surgery. It does have the disadvantage of lack of margin control, sometimes with a prolonged course of therapy and poor cosmetic result in some patients. Radiotherapy also has an important role in adjuvant management of basal cell carcinomas. Where a basal cell carcinoma has been incompletely excised, re-excision may be impracticable due to tumour size and location of the previous surgical repair. Subsequent treatment with radiation can improve outcomes in these cases. For radiotherapy to be a practical consideration, the patient must be available for multiple out-patient treatments over the course of several weeks. The side-effects of radiation include transient redness and desquamation. Late side-effects include hypopigmentation, atrophy, broken blood vessels and scarring.

Imiquimod: This is a topically applied immune modulator for the treatment of superficial basal cell carcinoma. Results vary depending on the dosing regime and the treatment periods.

Photo-dynamic Therapy: This is a technique that involves the use of a photo-sensitising agent (5-Aminolevulinic Acid – ALA) and a light source of a specific wavelength which produces controlled cell death. It is an effective and reliable treatment option for superficial basal cell carcinomas, offering an excellent cosmetic outcome.

Fluouracil: Should be reserved for patients with superficial basal cell carcinomas where no other treatment is practical.

Laser Ablation: May be considered because of its ability to treat large areas, the potential cosmetic result of the procedure and the haemostatic nature of the treatment. Limitations include non-specific thermal damage, the requirement to keep the treatment superficial to avoid scarring, and no histological assessment of the treated site.